Recently I forked the flycheck-raku (by @widefox) to the Raku GitHub organization. And did some improvements to it and published it on melpa, so others can easily install and update it.

For those who don't know, flycheck is a tool for syntax checking Gnu Emacs buffers.

You can install flycheck-raku using use-package:

Previously if you used flycheck-raku on a project, it would show errors on use SomeModule;, even though the module was in the lib directory of the project. And this would make flycheck kinda useless, because it wouldn't show further errors.

But in the new version of flycheck-raku, project root is detected and its lib directory is added to include path. So no more errors on valid modules.

In the new version, multi-line error messages are fully shown. 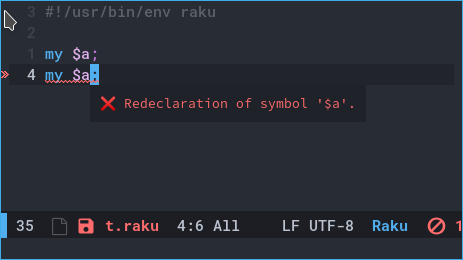 New version shows potential difficulties; I've only seen one such error message and that is Redclaration of symbol $x.